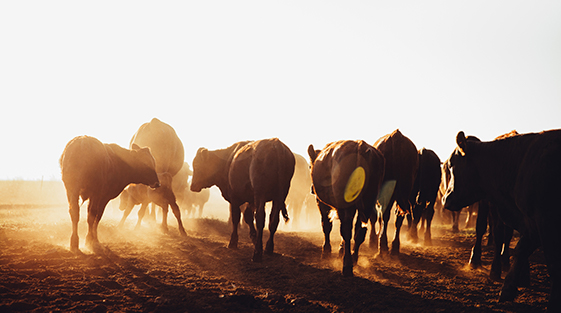 ET to beat the heat and get cows pregnant

Embryo Transfer to beat the heat and get cows pregnant during hot weather!

Embryo transfer to beat the heat.pdf

Embryo transfer to beat the heat.pdf

A lactating dairy cow in warm weather has much going against her when it comes to getting pregnant. Producing large amounts of milk each day causes generation of metabolic heat that can be 2-4 times greater than what is produced in the absence of lactation. It is difficult for the cow to dissipate all of this body heat when the weather is warm so she is prone to develop hyperthermia. Indeed, core body temperature begins to rise above normal at air temperatures as low as 25 to 29 °C. Moreover, heat stress can be magnified by exposure of the cow to high humidity and solar radiation.

One result of exposure to heat stress is a decline in estrous behavior and fertility. Resultant problems with estrus detection can be solved by implementing timed artificial insemination (TAI) programs. However, these programs do not improve the likelihood that a cow will become pregnant after insemination. Depending on the magnitude of heat stress, effects on fertility can be severe. In Israel, for example, conception rates in herds with minimal cow cooling declined from an average of 39% in winter to 3-12% in summer (see Table 1). Even when cows were extensively cooled, conception rates were only 19-25% in summer. Results from a dairy in North Florida shown in Figure 1 represent another example of low fertility in summer despite extensive cooling. These cows were housed in free stall barns with shade, sprinklers and fans but pregnancy rate per AI declined from 38-46% in cool months to 11-26% in warm months (see Figure 1).
The major causes of infertility instigated by heat stress are damage to the oocyte and death of the early embryo. These causes are the result of direct effects of elevated temperature on oocytes and embryos and the physiological changes in the cow caused by heat stress. One key aspect of effects of heat stress on reproduction is that the developing embryo rapidly becomes resistant to maternal hyperthermia. Thus, heat stress occurring after Day 3 of pregnancy is less likely to affect establishment of pregnancy than heat stress occurring earlier in gestation or in the period before ovulation. It is this characteristic of embryonic development that makes embryo transfer (ET) an effective tool to increase fertility during heat stress. Embryos are typically transferred at about Day 6 to 8 after estrus. Timed embryo transfer (TET) can be used to bypass effects of heat stress on estrus detection. Moreover, the embryo has acquired resistance to elevated body temperature by this time and is well equipped to survive and develop in the uterus of a heat-stressed female. As will be shown in this paper, pregnancy rates to embryo transfer in the summer can be twice as high as pregnancy rates to artificial insemination (AI). Moreover, the differences in pregnancy rates between summer and winter are much less for ET than for AI. Thus, using ET during heat stress can optimize herd fertility.

ows exposed to heat stress has been demonstrated in several parts of the world and when using embryos produced either by superovulation (SO) or in vitro fertilization (IVF). Results from five such studies are summarized in Figure 2. Each of these experiments was conducted in regions of the USA (Florida and Texas) or Brazil (Paraná and São Paulo States) where weather conditions in the summer are sufficient to cause low pregnancy rates per AI. Indeed, pregnancy rates after AI or TAI in these studies ranged from 13.5% to 22.9%. In each of the experiments, ET significantly increased pregnancy rates. This is true whether embryos were produced by SO (see panels A, B, D, and E) or by IVF (see panel C). Note also that ET increased fertility not only when performed at a specific time after detection of estrus (panels A, B, C and E) but also when TET was performed (panel D). 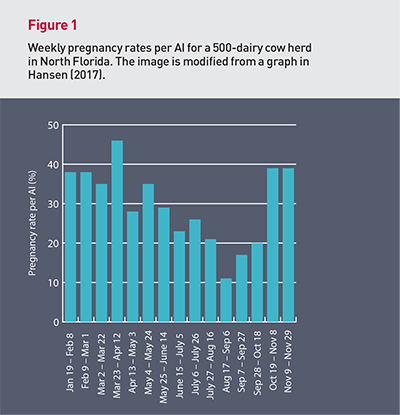 To understand why ET is so effective at increasing fertility in the summer, it is important to consider how heat stress affects fertility. Studies in which cows were exposed to heat stress at various points in the reproductive process have established that:

These concepts are illustrated in Figure 3.
The process of follicular growth is a long one. It takes approximately 120 days for a follicle to complete its growth and undergo ovulation. Moreover, it appears that the oocyte contained within the follicle can be damaged by heat stress for most of this time, at least as early as 105 days before ovulation. The oocyte can be disrupted by heat stress even after ovulation to reduce fertilization and cause formation of embryos with reduced competence to develop.
Once an embryo does form, it remains susceptible to heat stress through the first 1 or 2 days of development. At this time, the embryo resides in the oviduct and ranges in cell number from 1 to 4 cells. Additionally, the genome of the embryo has not yet been activated so it is unable to turn on genes that might otherwise protect it from negative effects of heat stress. This situation, where the embryo is very sensitive to heat stress, rapidly changes however, once the embryo genome becomes activated at the 8 to 16 cell stage (Day 3-4 of gestation). Indeed, heat stress at Day 3, 5 or 7 after breeding has little effect on embryonic survival.
By the time the embryo reaches a stage suitable for transfer (the blastocyst stage or, less commonly, the morula stage), the embryo has the molecular and biochemical machinery to protect itself from heat stress. Thus, exposure of a cow to heat stress that is sufficiently severe to damage the oocyte or kill an early embryo is less likely to disrupt pregnancy when an older embryo is developing within the cow.

Although ET has positive effects on pregnancy rates in the summer, it does not always completely eliminate seasonal variation in fertility. Nonetheless, differences between seasons are small compared to the situation with AI. Shown in Figure 4 are the results of six studies in which variation in pregnancy success after embryo transfer was compared for hot vs cool times of year. In all but two studies, pregnancy rates in hot weather (defined based on season of the year, average air temperature or temperature-humidity index [THI]), were lower than in cool weather. In most cases, however, the decrease in pregnancy rate was low. For example, analysis of a large data set from a dairy in North Florida (Figure 4C) indicated that pregnancy rates when recipients were exposed to the highest THI was about 5% lower than pregnancy rates when recipients were exposed to the lowest THI (34.8% vs 39.7%). In another large data set from dairies in Brazil, pregnancy rates were 3% lower in spring and summer than in fall and winter (Figure 4F).

"Some of the effects of heat stress on embryonic development are bypassed by embryo transfer because only those embryos of sufficient quality to develop to a transferrable stage are used for embryo transfer." 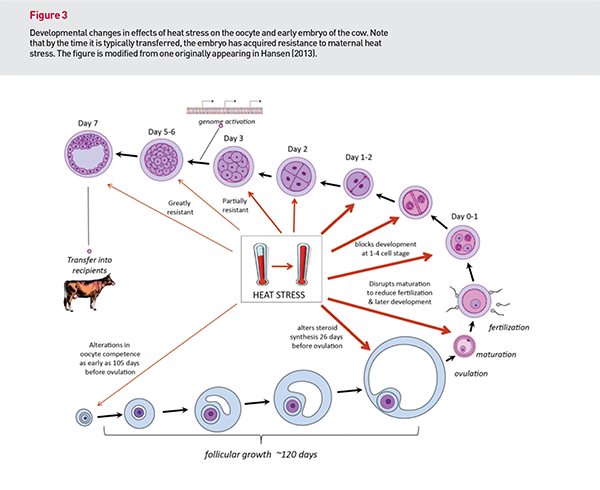 Synopsis: when to do embryo transfer in the summer

There are two important factors to consider when making the decision as to whether embryo transfer is a cost-effective means of achieving pregnancies in the summer. First, it should be determined whether cows are experiencing heat stress sufficient to compromise fertility. As shown in this paper, use of ET causes a large increase in pregnancy success as compared to AI when heat stress depresses fertility. However, when heat stress is not severe enough to compromise reproductive function, pregnancy rates following ET are usually similar to those achieved by AI. One way to assess the impact of heat stress on fertility is to calculate the ratio of pregnancy rates per AI for cows bred in the summer as compared to pregnancy rates for cows bred in the winter. An example of this calculation is shown in Table 1. The lower the summer: winter ratio, the larger is the expected benefit of ET for increasing pregnancy rate.

Another way to evaluate whether heat stress is affecting the herd is to measure rectal temperature during the hottest time of day (typically 1400-1700 H). Cows with rectal temperatures at 39.5 °C (103.1°F) are sufficiently heat stressed to have lower fertility. The second factor to consider is the source of embryo used for ET. The choice of whether to use superovulation or IVF is a complex one that depends in part on availability of trained personnel to do the procedures as well as whether one wishes to optimize the number of embryos from individual donors (in which case IVF would be favored), produce embryos with optimal competence to establish pregnancy (superovulation favored over IVF) or freeze embryos (usually more effective for superovulation but some laboratories have good results with IVF embryos). Embryos can be produced using donors on the farm or from other farms with more elite genetics. In addition, embryos can be transferred fresh, where pregnancy rates will be optimized for embryos produced by IVF, or, to avoid heat stress effects on embryo production, they can be generated during the cool season and stored in a frozen or vitrified state until transfer.
A key consideration in choosing the type of embryo is cost. When donors and bulls are selected carefully, ET during heat stress yields two economic benefits — increased fertility and production of genetically-superior offspring. Any decision to use ET in summer will be based on an estimate of the value of these benefits vs the costs of embryo production.